In her latest dispatch from London, Katie Burnett, a friend, actress and writer, takes us behind the scenes of her short film 80’s Vampire Flick…

Remember how Heathers was the coolest film ever? Aside from the hunk that was Christian Slater (who didn’t have a crush on him during Heathers, Pump up the Volume and Untamed Heart?!!), the film had snappy one-liners and incredible shoulder pads, and one of my personal favourite actresses, Winona Ryder. 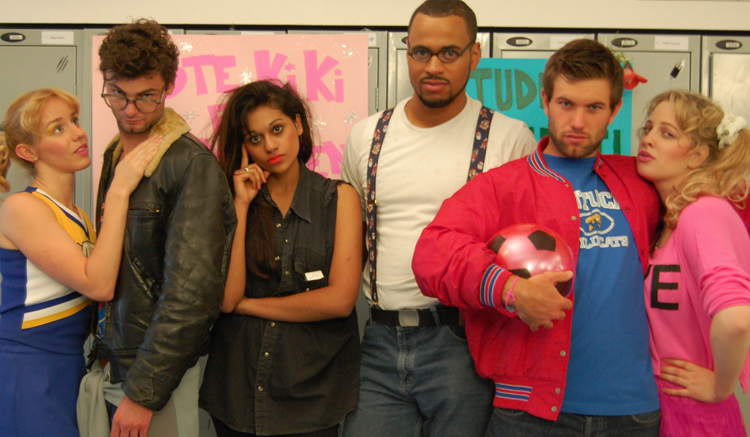 So, OK, you know Heathers was super back in the day, and vampire stuff is super cool now? And you know how the 80’s are somehow funny, no matter what? Scrunchies, mom jeans, Christina Applegate? What does it all have in common? Well, one day my friends and I decided to stop waiting to see if Spielberg was going to call (any day now) and go out and make a short film. 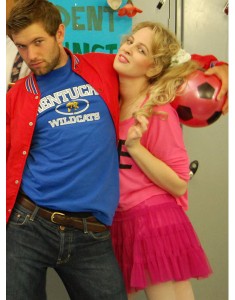 We decided to make it a comedy. Tasked the writer, I decided to combine my love for 80’s films with the overly popular vampire craze, and make what is now known as 80’s Vampire Flick – a story of five high schoolers on detention, but one of them is a vampire slowly killing them all off.

Tasked with dressing the actors, I set off the ever popular Brick Lane, a place which, if you’ve been reading these dispatches, you know has incredible vintage clothes.

For my character (right), the bitchy Kiki Summers, I went for bright pink with a huge head of fake hair and a scrunchie. For Tristan Brooke, who played Kiki’s all-jock boyfriend Bobby, I went for a letter jacket and cutoff t-shirt, with a bright pink soccer ball, because nothing says 80’s like ironic pink and matching couples… 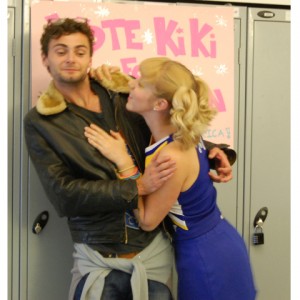 For Caroline Amer (right) who played Brandi, the head cheerleader who’s in love with the school outcast, I found a little vintage cheerleading outfit that already had MVP etched into the back (found at Rokit Vintage) and curled her hair to the nines.

Jackson Miller, who played Jimmy D, well, he was able to wear all his own clothes…

Roshni Rathore played Virginie French (below), the emo girl dressed all in black, and she had hair teased as high as Kelly Kapowski and some rad orange lipstick to off-set the whole outfit. Nothing says emo like a black cutoff denim shirt, skinny black jeans and black pumps. And nothing says 80’s like some orange lipstick! 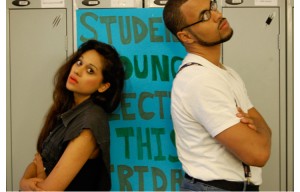 Obi Ugoala (left) as Carter Luther is a very, very tall man, but with some specs and Santa braces (suspenders), he suddenly looked shy and vulnerable. Not only was every item of clothing affordable, it was all found on one street – the always incredible Brick Lane!

Special thanks to Sally Miura for make up and teased hair and Laurence Chater for directing!

P.S. Want to keep adding to your “When I’m in London” list? Catch up on Katie Burnett’s earlier dispatches: Sundays on Brick Lane, Saturdays in Camden Town, Friday nights at the theatre, and her East Coast nostalgia.

Did I go on any rides?