A few months ago I had a great idea.  I would write a “guest post” (as I understand these things are known in the blogosphere) about certain songs that I enjoy.  And this guest post would not be in the form of some cliche “top ten songs of 2009” thing, because it was September (or October maybe).  And then I forgot.  And now it’s the end of 2009 and I still haven’t done this super cool guest post.  So, without further ado…here are my top ten songs of 2009… 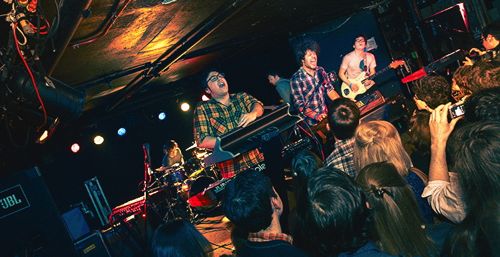 10.  We Were Promised Jet Packs – It’s Thunder and It’s Lightning.  (i’m a sucker for a heavy scottish accent)
9.  the xx –  Heart Skipped a Beat (honestly i could have picked any song off this album.  mostly because they all sound identical. but good)
8. Phoenix – love like a sunset part I (no words, no problem.)
7. The Dodos – Troll Nacht (folksy. but not too folksy.)
6. Poison the Well – Antarctica Inside Me (this list needed something a touch heavier.)
5. Sigur Ros – Inní mér syngur vitleysingur (i’m also a sucker for icelandic songs that I can’t understand. and yes, I know this was released in 2008, but I didn’t do a list in 2008. so deal with it.)
4.  Phoenix – Lisztomania (everyone likes Phoenix. and everyone likes this song.  but I liked it before them.)
3.Cymbals Eat Guitars – And The Hazy Sea (the guitar at 3:40 will blow your skull.)
2. Passion Pit – Moth’s Wings (epic.)
1. Passion Pit – Make Light (yes, passion pit at number 2 and number 1.)

Thanks MC! I’d add Phoenix 1901 because I could play that song on repeat for.like.ever. And Miley Cyrus Party in the USA because the DJ is playing my song and I feel alriiiiight. Want to contribute to the Anthology? (Huzzah!) Send me an email at theanthology@live.com.

Let’s head back to the sun, shall we?

This is why you guys are the best