In The Anthology’s Wear/Where column, we celebrate the parallels between what you wear and where you live. 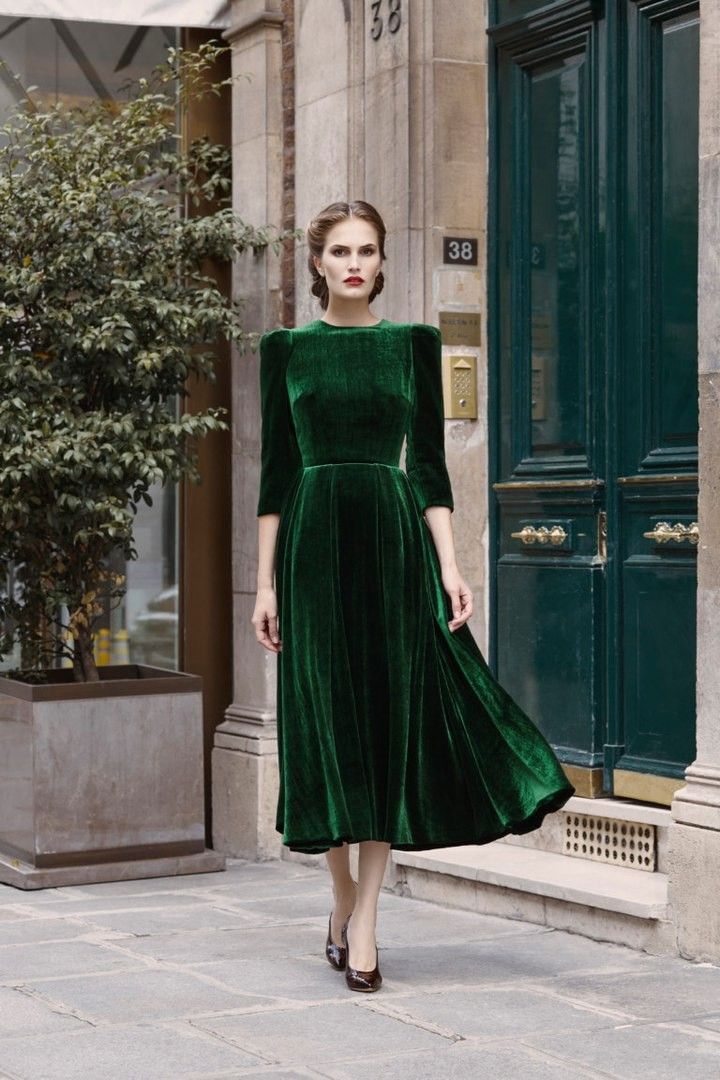 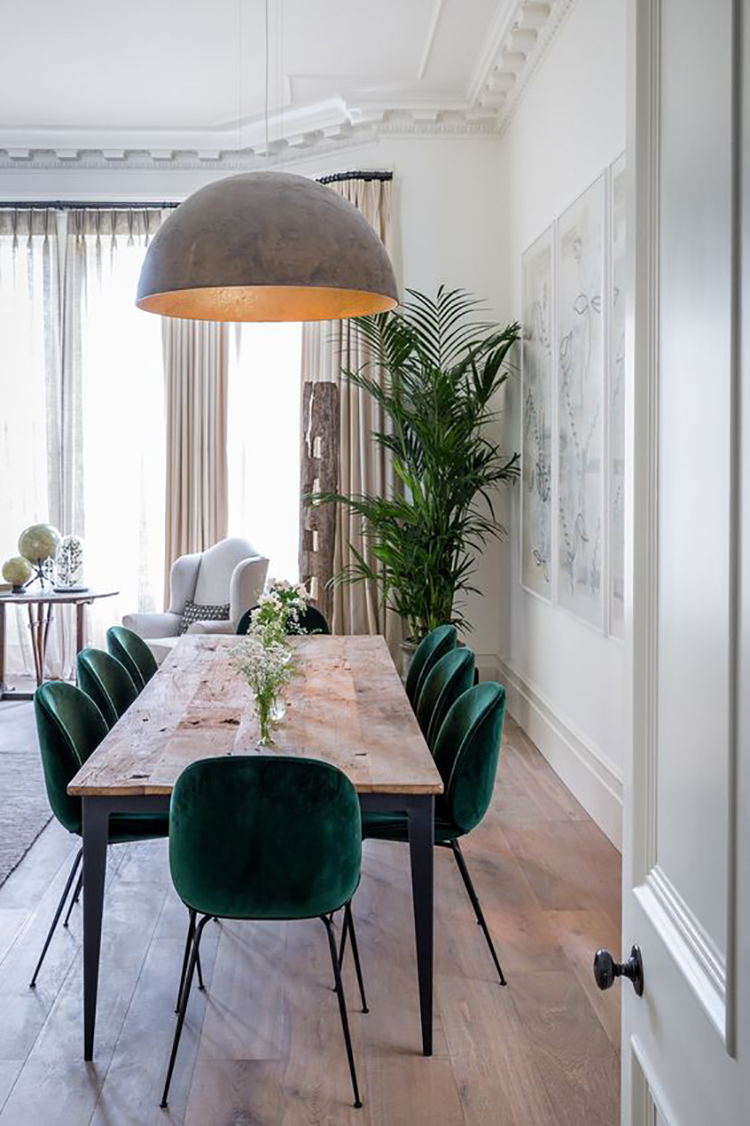 …that perfectly matched your emerald velvet chairs, would that be a major yay or no way, bébé?

Where: Interior design by Kitesgrove. 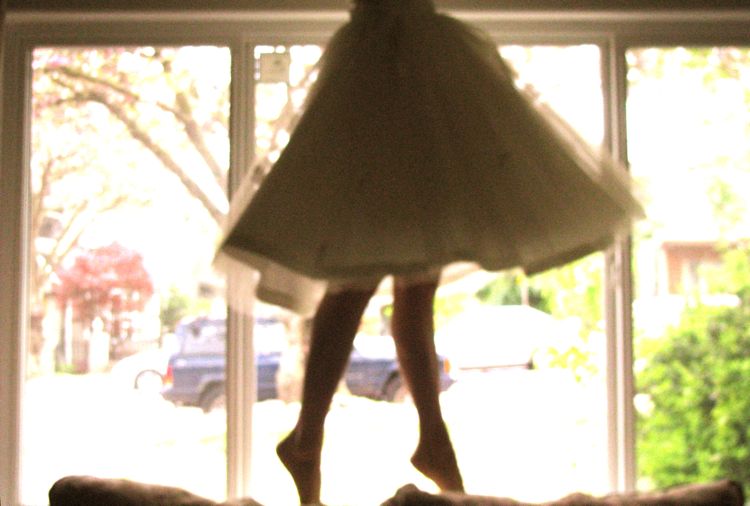 I have a bone to pick with Marie Kondo. The Life-Changing Magic of Tidying Up is great and all. Clearing out clutter really can be freeing. Living a more minimalist lifestyle can be liberating. Blah blah blah.

But I’ve learned the hard way that there is an exception to that rule: Do not donate your vintage pieces.

When I look back at posts like this one from several years ago, I am reminded of the vintage wedding dresses and leather skirts and sequin blazers I wore and loved and subsequently donated in a fit of KonMari-ing.

And you know what? I wish I’d shoved them to the back of my closet instead.

My kids’ baskets and baskets of toys, on the other hand? I couldn’t possibly KonMari those fast enough.

In The Anthology’s Wear/Where column, we celebrate the parallels between what you wear and where you live. 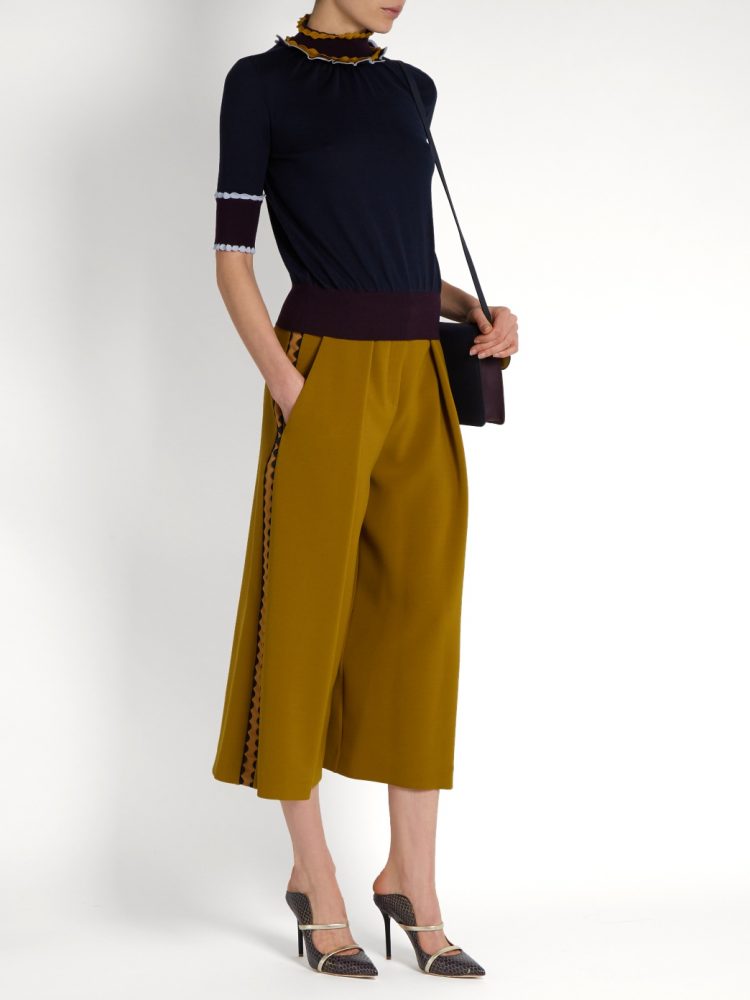 Gold is the colour of fairy tales. And with these two touched-by-Midas pieces, your fall outfit and your kids’ playroom could be the perfectly coordinated stuff of, well…fairy tales. 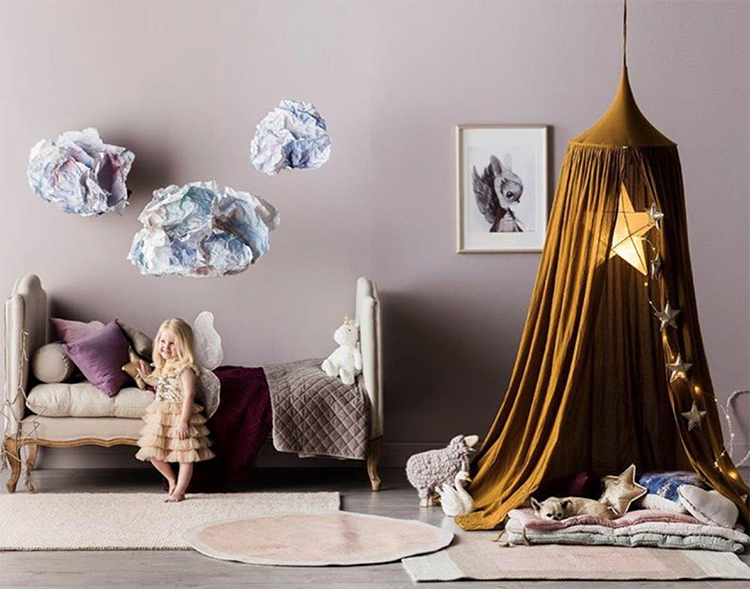 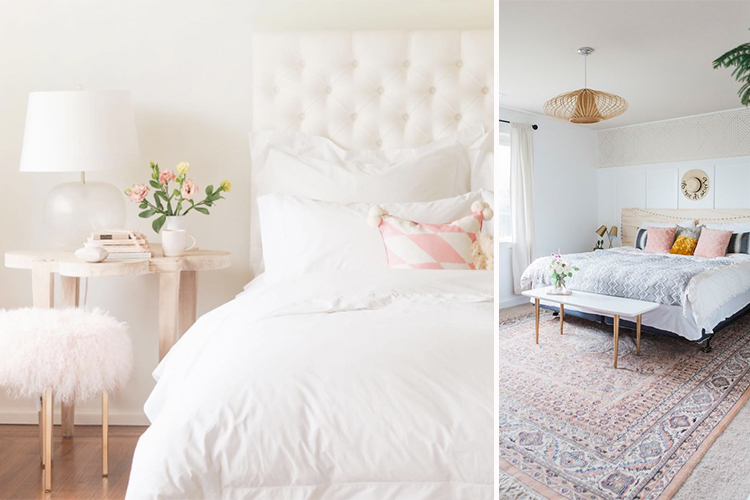 Bedding by The Cross (one of the comfier projects I’ve worked on in my capacity as a copywriter lately) would look beautiful in any space. 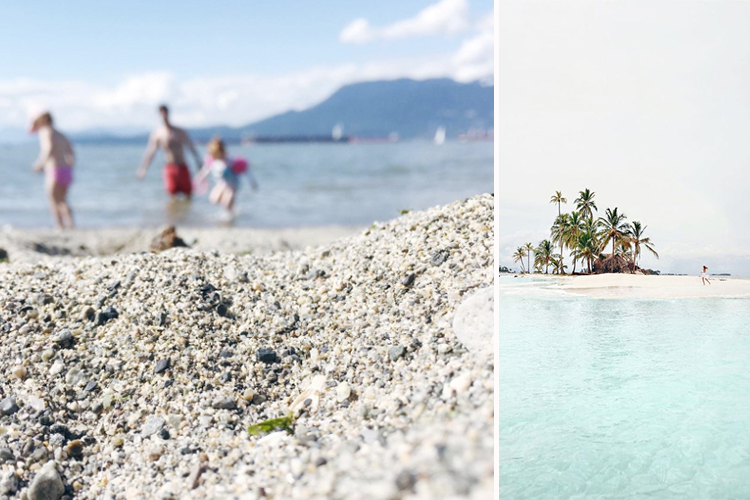 I’ll take a West Coast summer day over a private palm-treed island, but that’s just me. 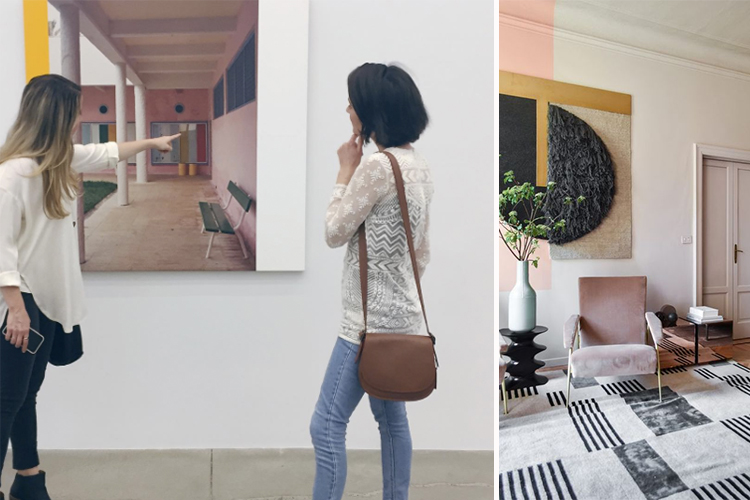 Art makes the space (and the not-so-candid photo at a special viewing at Rennie Collection).

An evening out at Kissa Tanto/stepping out. 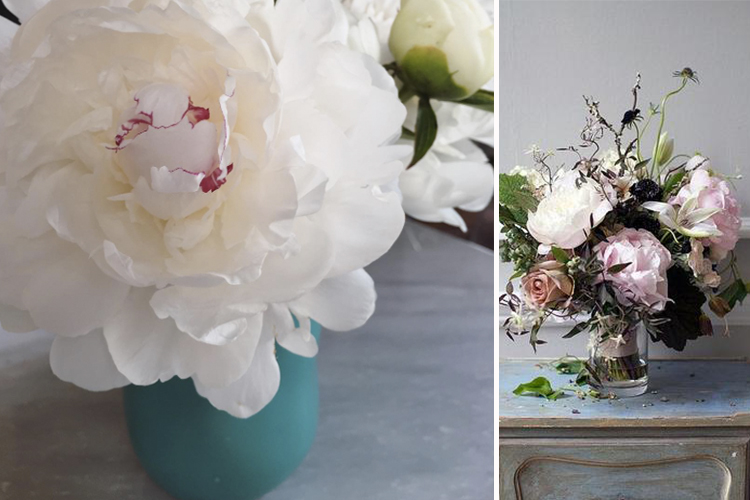 Peonies: so basic, so beautiful.

Wear/Where | In Black and White 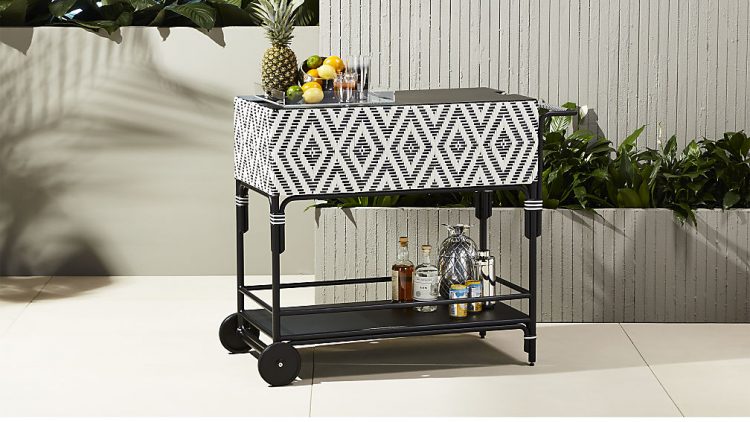 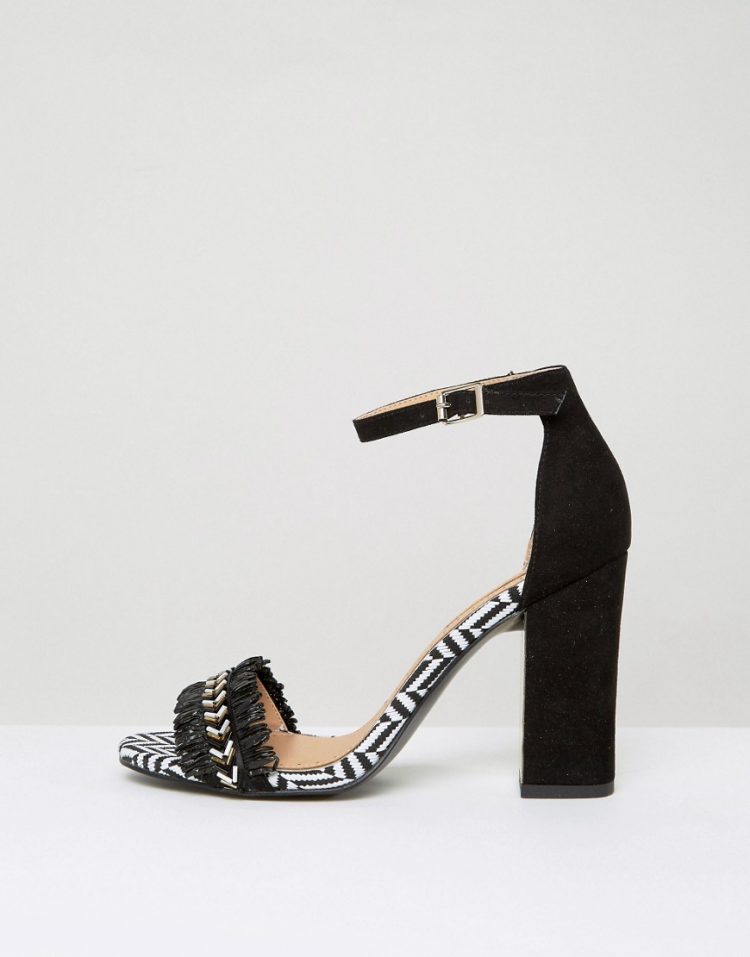 Bet you didn’t know you were missing an outdoor bar cart, did you? Well, it turns out that’s exactly what your patio needs right about now. Slide on a pair of matching sandals and you’ll be the hostess with the mostess colour coordination your party guests have ever seen.

Get Involved | Variety BC’s One Night in Monte Carlo Gala 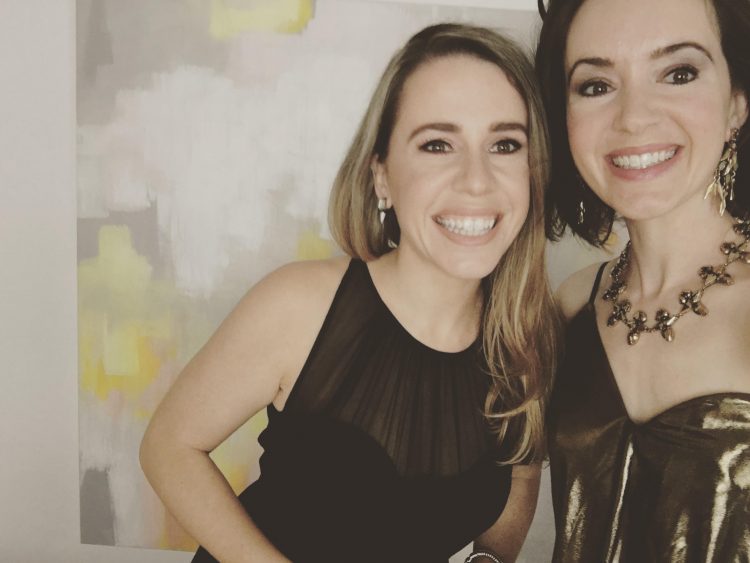 When I was backpacking through Europe during undergrad, I tried to get into a very swanky casino in Monte Carlo. And was denied. The security guard looked my friend and I up and down, zeroed in on our flip flops (which had trod more hostel floors than he could have known) and gave us the boot.

The folks at Variety BC’s One Night in Monte Carlo gala were much more welcoming. 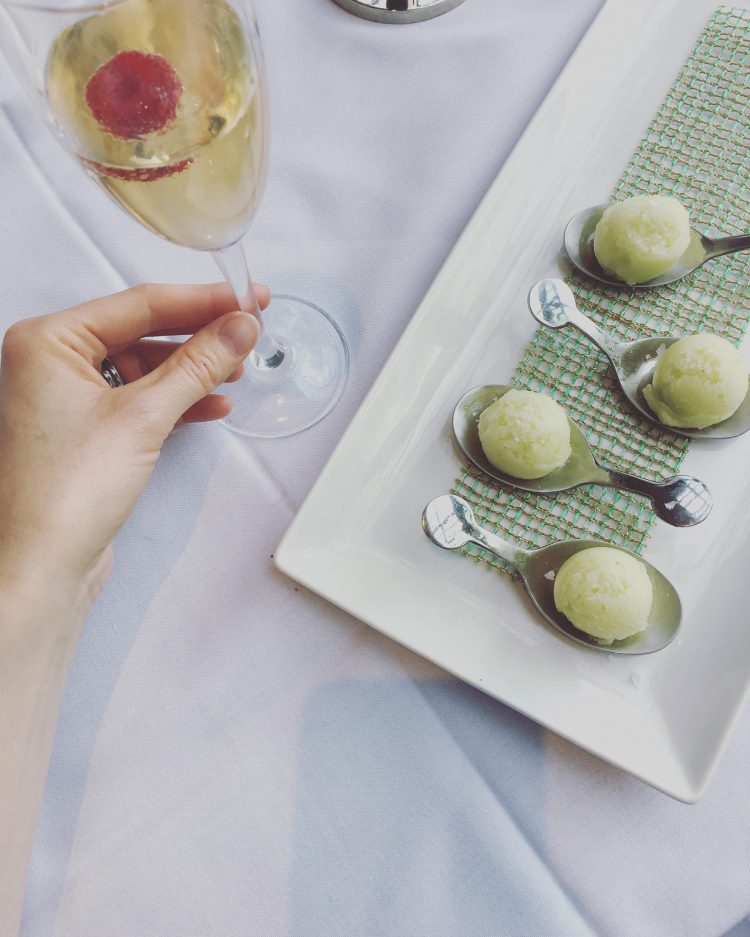 The inaugural event — which featured dinner, dancing, and a casino of sorts — took place at the Pinnacle Harbourfront Hotel and raised $200,000 for the foundation’s mobility program. 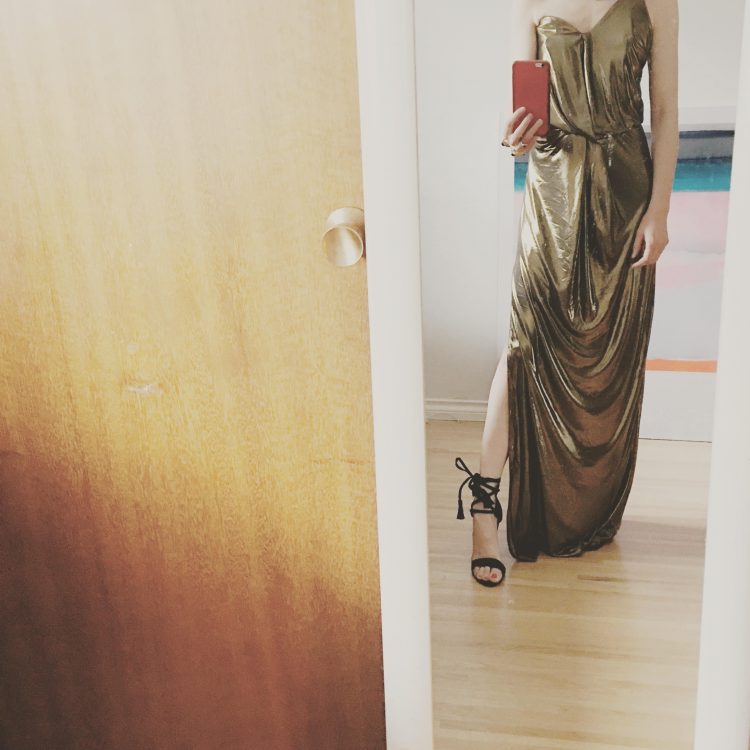 And, to follow up on the Global Television segment I did to help promote the event, I wore this Halston Heritage gown. With Rebecca Minkoff heels instead of flip flops.

Style | Moderating a Q&A at the Museum of Vancouver 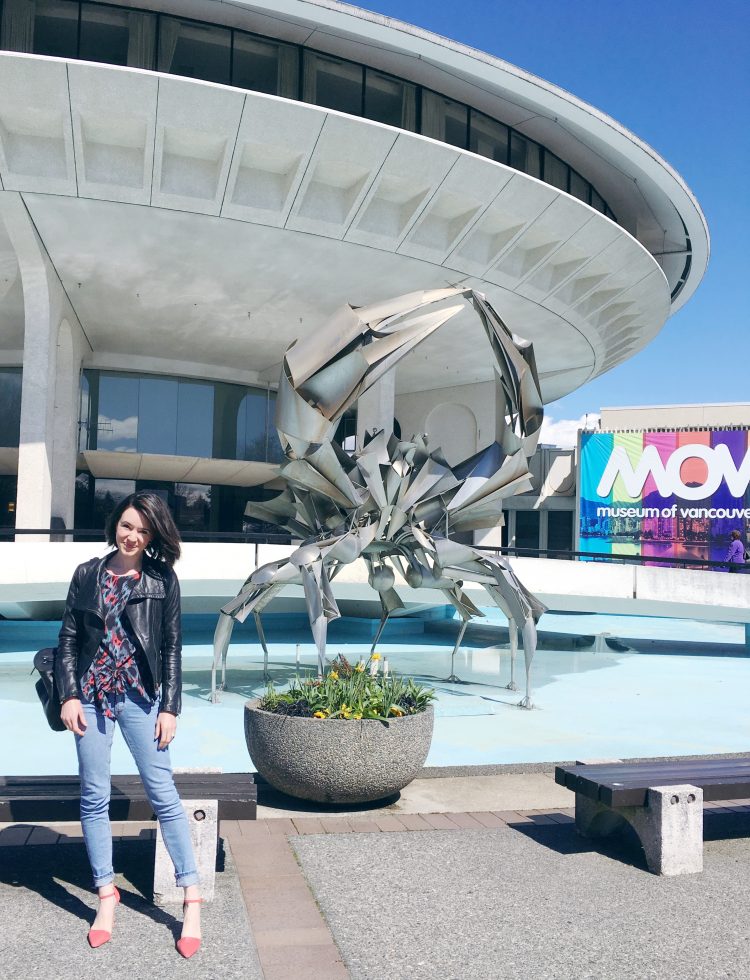 So here’s something I didn’t want to focus on before I moderated a Q&A at the Museum of Vancouver this past weekend: I’ve never moderated a discussion like that before. I’ve presented on live television a trillion times. I lectured at one of Canada’s biggest universities for years. I’ve been on panels. I’ve spoken at events. I’ve given wedding speeches.

I’ve done many things you’d think would prepare me for something like this, but let me tell you: moderating a Q&A is a very different beast. 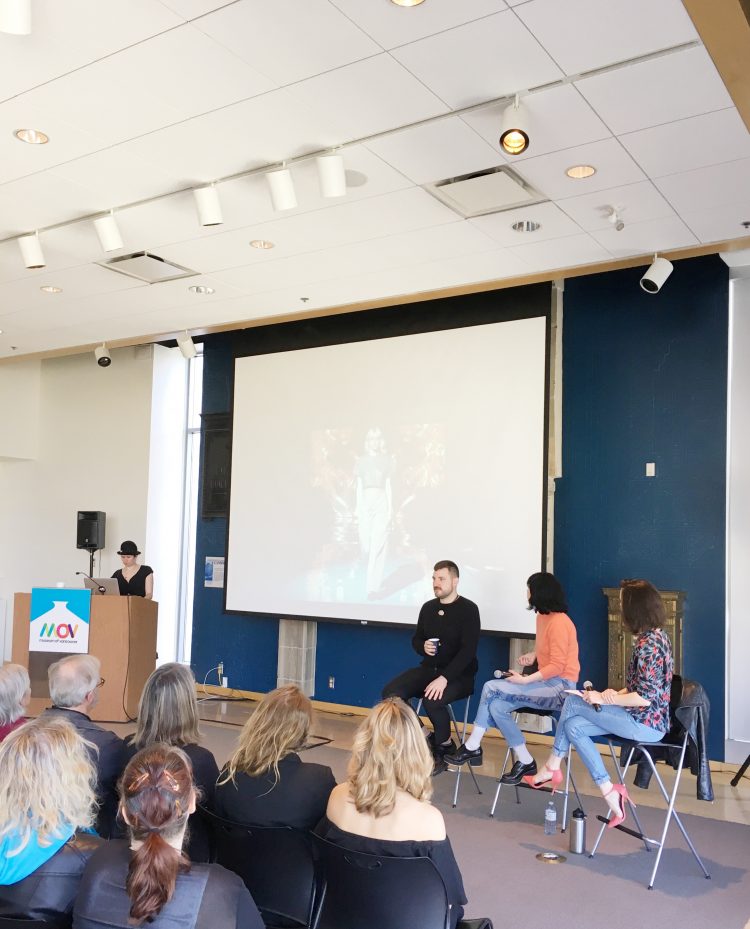 Since you don’t know where the discussion is going to go, you have to be prepared for it to go anywhere. Which means doing a lot of prep work. So, so much prep work; researching every public component of the interviewee’s life and career (and in my case, showing up with three pages of typed notes). 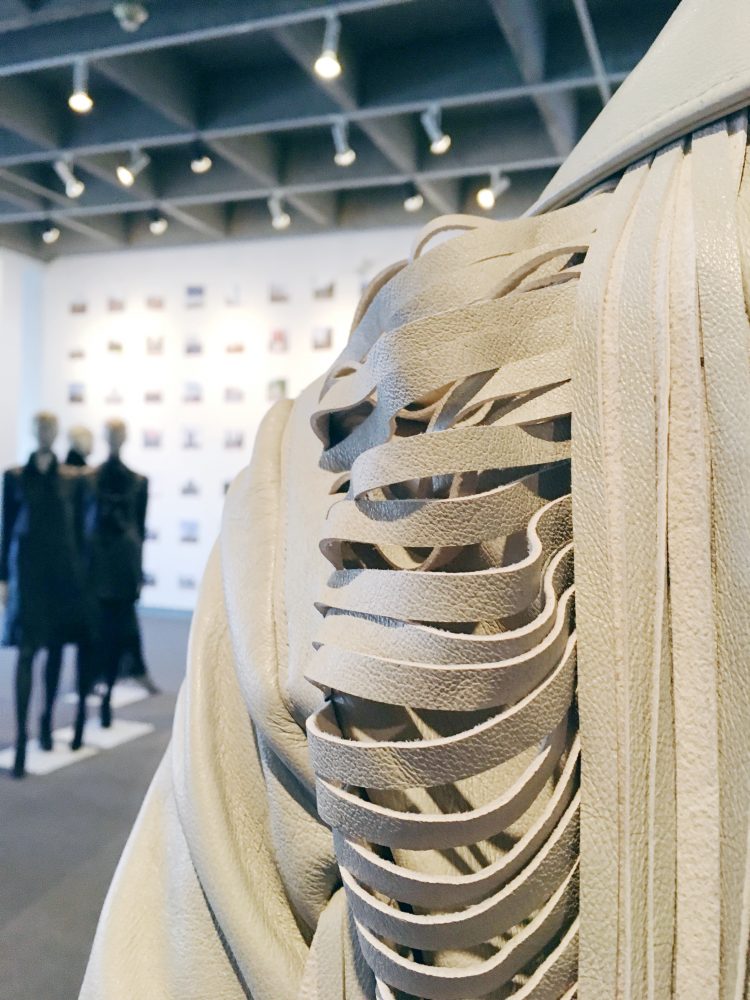 Thankfully, designer Evan Biddell and stylist Ellen Balsevich are both great interviews. Their collection, created for the 81lb. Challenge for Eco Fashion Week, is fascinating. And the message behind it — the average North American discards 81lb. of clothing and textiles in a year, making fashion the second-most polluting industry after oil — is powerful. 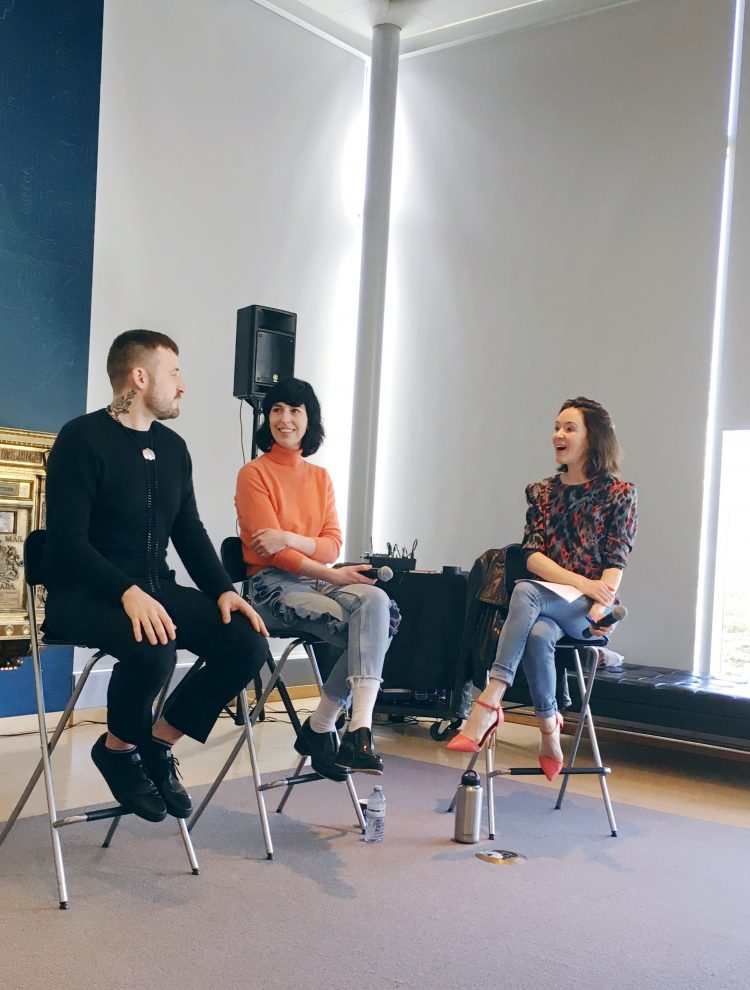 We talked about Evan launching his career on the first season of Project Runway Canada. We discussed the challenging parts of working in a creative field, we talked about Evan’s home/studio in Toronto’s Darling Mansion, and, because the event was part of Eco Fashion Week, we talked about the beauty — and significance — of upcycled clothing (while wearing coordinating upcycled outfits, no less). 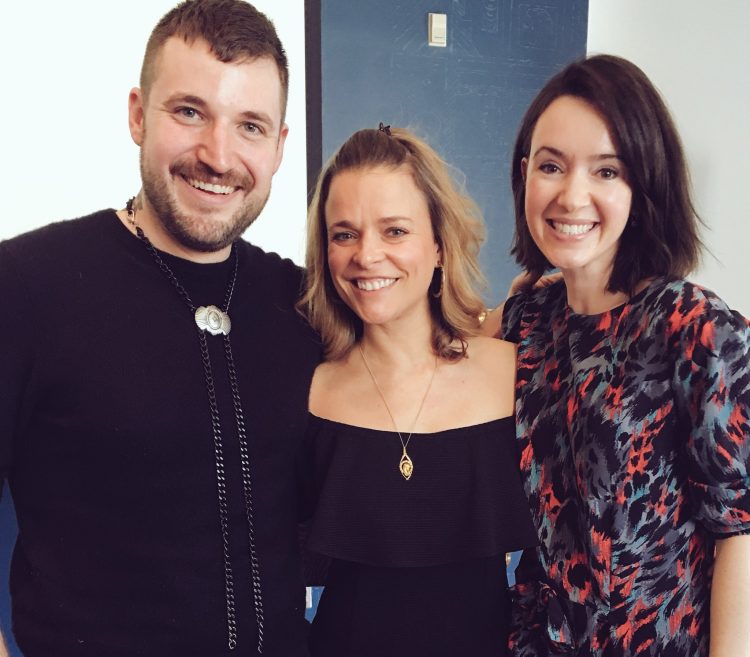 It was fun. I learned a ton. And maybe at the next Q&A I moderate, I’ll only need to show up with two pages of notes.

Thanks for having me, Museum of Vancouver and Eco Fashion Week!

[Photos by Larissa Dundon — thanks for your help!]

Style | Upcycling Q&A at the Museum of Vancouver

I love a good upcycle. In fact, the early days of The Anthology were all about reinventing vintage pieces like this dress, this formerly comical piece, and even the odd piece of furniture, like these stools from Habitat for Humanity for the Vancouver Home and Design Show.

But designer Evan Biddell (of Project Runway Canada fame) has taken upcycling to a whole new level. For Eco Fashion Week’s 81lbs. Challenge, he has created an entire line using the volume of textiles the average person discards in a year. (I covered last year’s event for Vancouver is Awesome — read up on it here.)

On Sunday, April 2nd, I’ll be moderating a Q&A at the Museum of Vancouver with Evan and stylist Ellen Balsevich. It starts at 2:00; you’ll find all the details here.

Want to come? We’re giving away a few tickets. Email me at KDundon@TheAnthology.ca with subject line: Museum of Vancouver for your chance to win.

Get involved | Variety BC’s One Night in Monte Carlo Gala 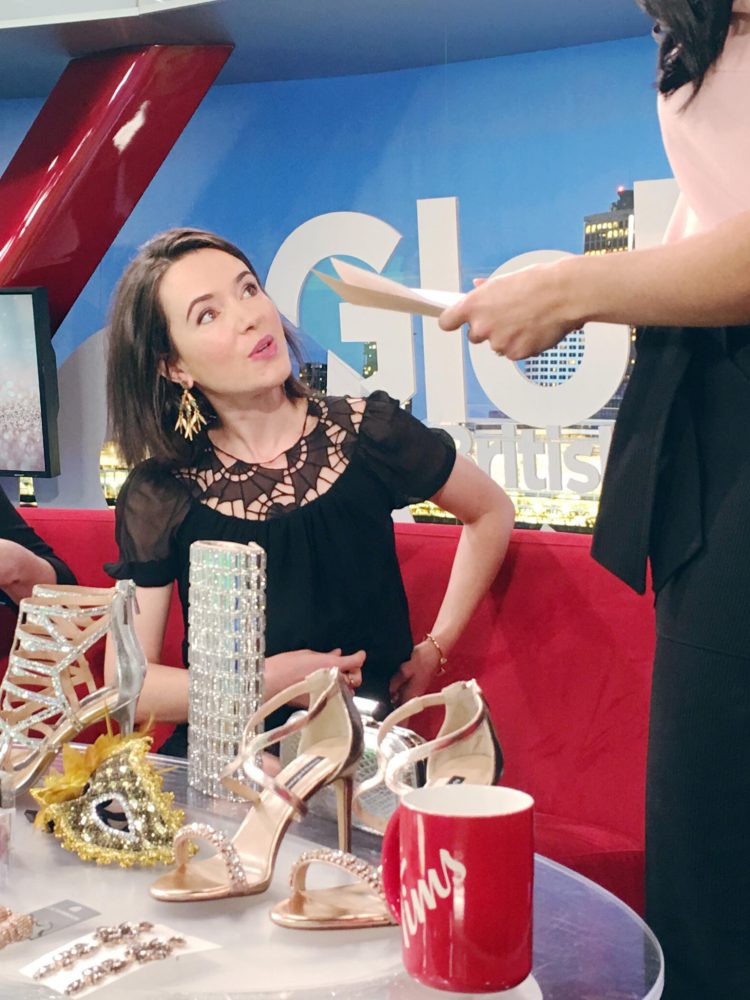 Here’s a serious question for you: If you could be any princess, who would you be? Kate Middleton? Elsa from Frozen? I’d choose Charlotte of Monaco. The woman is pure glamour (she’s Grace Kelly’s granddaughter after all), and seems to live a life of galas, yachts and horseback riding.

Why do I ask? (Aside from, you know…general curiosity?) Because Variety BC’s newest gala One Night in Monte Carlo is coming up on April 8th, which means a princess’s gown collection would come in handy. The gala will feature live entertainment, a red carpet, bespoke cocktails and fine dining at the Pinnacle Hotel in Vancouver. But the best part? It benefits Variety’s mobility program, which provides Sunshine Coaches for community organizations and offers safe, wheelchair-enabled transportation for families with children needing support.

I’ll be there! Will you? Get your tickets here.

Now, if you have a princess’ gown budget, you’re already set wardrobe-wise, I’m sure. But if you need a little inspiration for what to wear on a less-than-royal budget, I stopped by Global BC to share some ideas from Hudson’s Bay, Aldo, Town Shoes, Le Chateau, H&M, all provided by Coquitlam Centre. Take a look.

Thanks for having me, Variety and Global BC! And thanks as always for your help, Jerome Insorio! 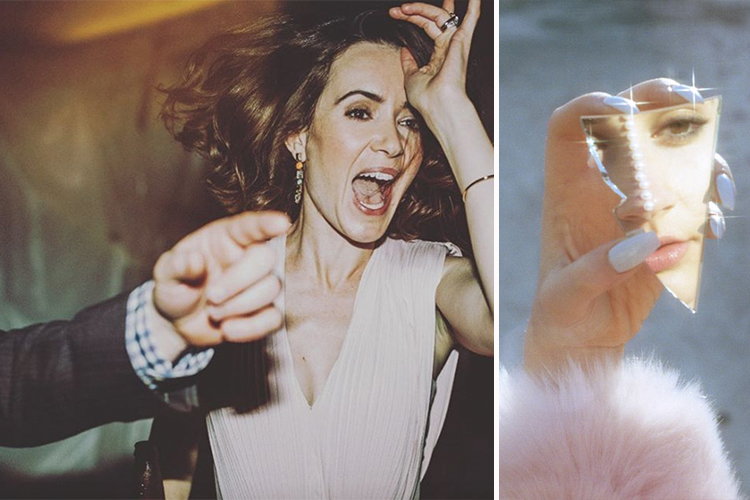 Hit the floor. At my sister’s wedding (photo by The Apartment) + someone who is most definitely a dancing queen. 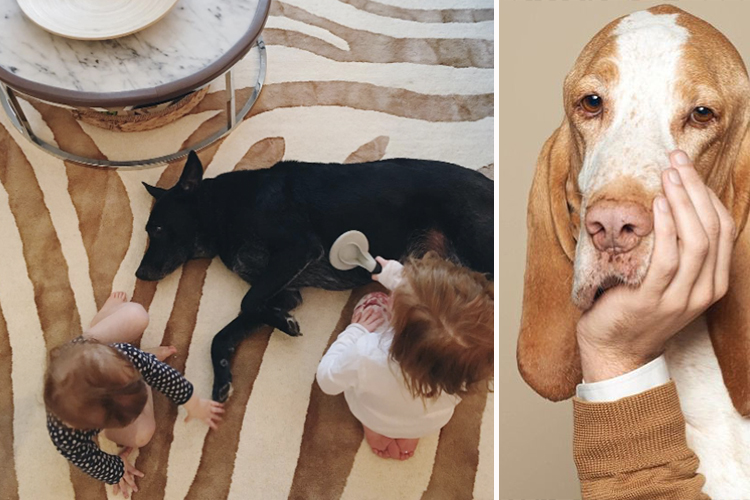 Patience is a virtue. My beast tolerating a grooming + his true feelings about it. 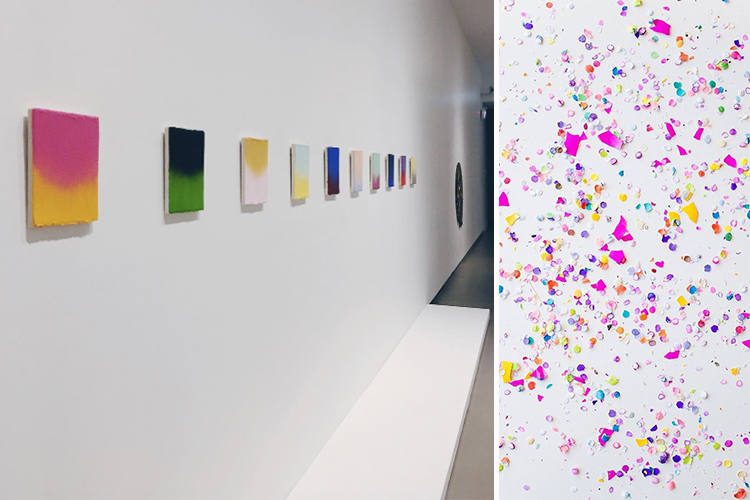 Art attack. Colourful canvasses at the Vancouver Art Gallery make me want to paint (a messy prospect, to be sure) + a delightfully colourful mess. 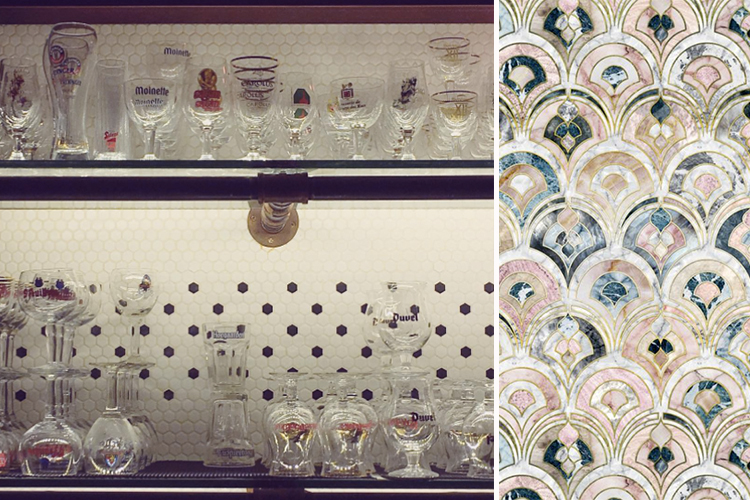 Tiles for miles. A honeycomb tile backsplash + something a little more complicated. 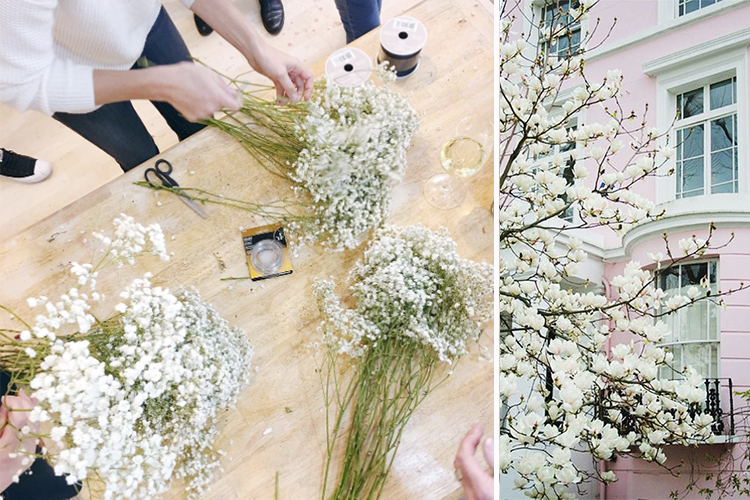 Flower power. Arranging flowers for a friend’s wedding (I’ve never been so intimated by a project, nor had as much fun doing one!) + my very favourite flowers: magnolias.