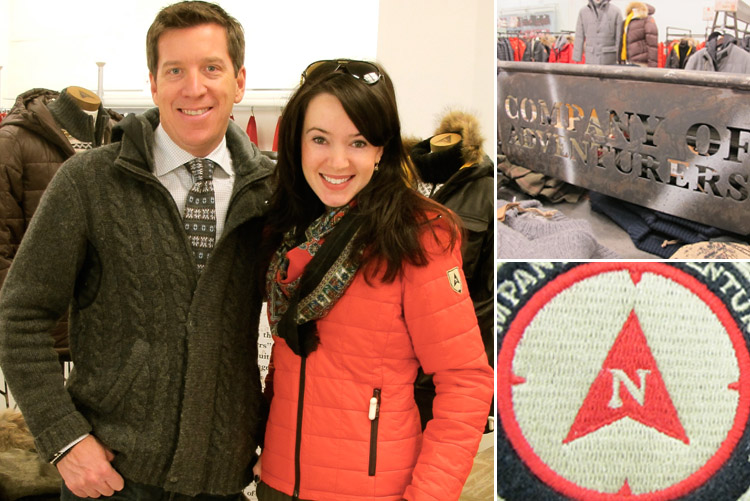 Let’s talk about tangerine for a second. I, like the good folks at Pantone, love this colour. It conjures images of Miami sunsets and drinks served out of coconut shells, doesn’t it? But forget summer sunshine for a second — I love tangerine-coloured winter outerwear too. It’s especially fitting on a jacket from the Company of Adventurers, a line that was originally conceived as colouring books.

Yes, you read that right: colouring books. When Michael Purkis (pictured with yours truly) was helping his young son with his homework, he realized how little Canadians are taught about Canada’s wacky, wonderful history. Developing a line of fun, educational materials would be a fitting solution, but Purkis’s expertise lies in textiles (he’s president of Caulfield Apparel) so he turned to what he knows best. A move which, funnily enough, befits Canada’s history.

“We’re a country that was founded by business people,” said Purkis when I met up with him at The Bay, which carries the line exclusively. “They were traders, not explorers.”

Those traders originally called themselves “The Governor and Company of Adventurers of England trading into Hudson’s Bay.” (Aha! The inspiration for the Company of Adventurers name!) Pieces in the line’s first season are named for important figures in Canadian history: Prince Rupert, Pierre-Esprit Radisson, and Sir Martin Frobisher to list a few.

While the line is technically tricked-out, there’s a focus on the style side of the equation too. Think down-filled pockets that are angled to flatter. You know, for urban explorers.

“You don’t have to be badass, just adventurous,” said Purkis. “For some people that might mean summiting Everest, for others that might mean trying sushi for the first time.”

And for others, that might mean wearing tangerine in the winter.

P.S. Thank you, B-Insider, for naming The Anthology one of your five favourite Canadian fashion blogs!