I laughed when I saw that la flore et la faune had the Anthology listed under “Ceux qui devraient dessiner,” which (according to Google Translate) means “Those who should draw.” If there’s one thing I should not do — it’s draw. Je suis terrible. 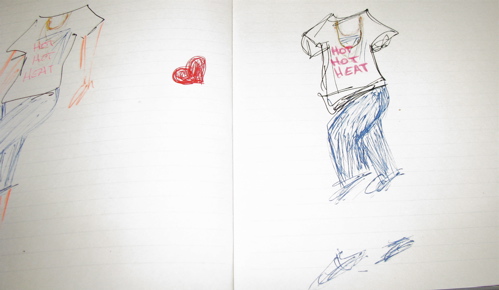 But La Flore didn’t believe me. In fact, La Flore challenged me to draw an outfit. Et voila. It took me three tries to produce the one on the right. And I didn’t even bother to include arms. Or shins.

It looked much better in real life. With all my chains and my concert t-shirt (I’m one of the people who buys those. Remember the New Kids?).

And my F-Troupe shoes. Which I love because they’re just a little boyish.

I suppose, then, it’d be fair to list me under “Ceux qui devraient wear those more often.”