My boyfriend and I are going to Turkey next month (YAY!) and was wondering if you had any tips for us. We’re going on a pretty tight budget and are only staying for about 10 days. We’re flying into Istanbul and don’t really know where we should go. Any suggestions?… I really enjoy reading your blog, by the way. It’s inspired me to be a little bit more creative with my vintage pieces and random finds.

I’m no expert on Turkey (I spent a week in Istanbul and then flew to Antalya on the Mediterranean coast where I spent another week) but I’m more than happy to share my experiences and the places that all y’all so kindly recommended I visit during my recent trip.

We stayed at the Hotel Mina in Sultanahmet, which certainly isn’t the cheapest hotel in Istanbul, but is a really good value. There are also a ton of hostels in a beautiful neighbourhood near the Four Seasons where the streets are wider, traffic is quieter, and you’re still only a few blocks from the Blue Mosque (which was my favourite part of the city). 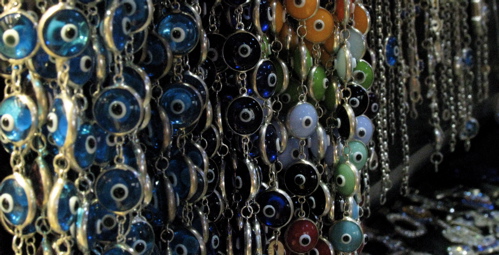 I am proud (or ashamed) to say I visited the Grand Bazaar four times. We ate chicken shish at a really good, really cheap little restaurant called YENiTAT, which is tucked right behind the main strip of higher end jewelry stores. My sisters-in-law Jaclyn and Whitney scouted it. They found that most shop owners recommend it, so just ask one when you’re there and you’ll get pointed in the right direction.

Jaclyn, who is far more organized than I am, also took the business card of any Bazaar shop she wanted to return to and wrote a little note on the back of it so she’d know where it was (the place is a labyrinth). “You get so mixed up about where you wanted to go back to, wanted to exchange something, wanted to bring your friend to, that grabbing cards as you go helps,” she says. 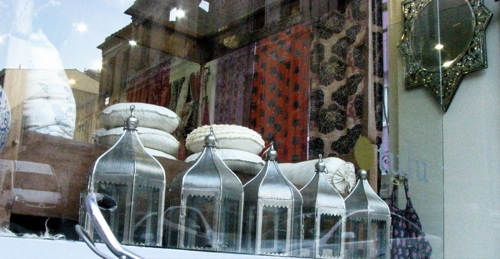 And speaking of shopping, we stumbled across the tiniest, prettiest interior decor shop called Tulu, just around the corner from the Blue Mosque. Prices were marked in American dollars. 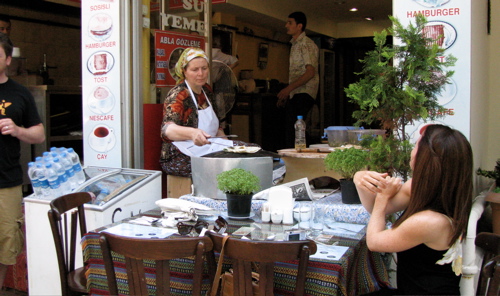 We ate meat on the street a lot (the cafe pictured above was right beside our hotel) but we also ate amazing salads at every restaurant we visited.

Before I left for Istanbul, Osman wrote “To hang out, you can choose Taksim square and Istiklal avenue.” Which we did. We ate dinner on the rooftop terrace of a place called Boncuk on Nevizade near Taksim Square and later wandered the alleys till we came to a bar named Mr. Bliss where we joined everyone dancing to live music in the street. Go on a Friday or Saturday — the streets are packed with more people than you’ve seen in your life. And the area near Taksim houses stores like Topshop so it’s worth visiting during the day too. 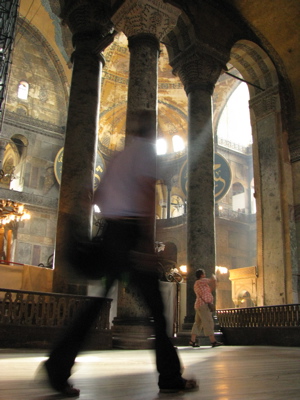 Much of our down time was spent sitting on the benches between the Hagia Sophia and the Blue Mosque, where you can order tea. Both sights are worth visiting. The Hagia Sophia (pictured above) was especially beautiful inside, though admission wasn’t particularly cheap. We didn’t spend the few extra bucks on a guide, but my sisters-in-law did and they said it was well worth it because they learned so much about the Hagia Sophia (and a bit about the Blue Mosque next door). Plus, they got to skip the lines.

Going to a hamam (Turkish bath) was certainly an experience, though by no means a cheap one (it was about 50 Turkish lira per person).

But really, the most amazing thing about Istanbul is wandering its streets. Hauteworld said “I would just roam the city, it’s quite bohemian and the food is divine. There’s also a ferry that takes you across to ‘Asia’ if you want to set foot on another continent ;-)”

There were also a few other places I wish I had visited, like those that creative Be (who has been to Istanbul several times) recommended: Dolmabahce, Topkapi Palace and Bebek (a street that has lots of great restaurants and views of the Bosphorus).

If you have your own experiences in Istanbul or Turkey, leave a comment. Jenny, I hope this helps!

Wear/Where | Two brights and a bold