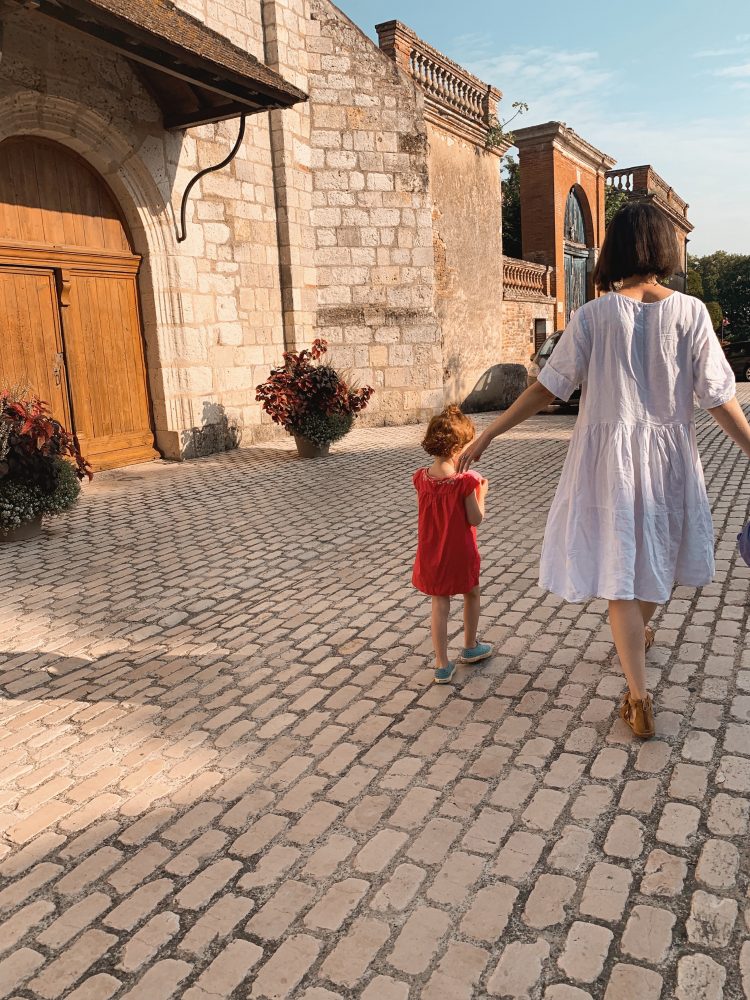 This was taken a few minutes after climbing the bell tower of a ancient church in Pommevic, France. Those sandals have seen some things.

I wrote this piece when I returned from Europe in the fall. But I never published it.

I’ve been thinking about it a lot lately because it’s almost the exact opposite of COVID-19 quarantine, when the only access we have to the world is through our devices. Plus, like many of you, travel has been on my mind a lot lately. I hope you’re healthy and enjoying some virtual travel until you can once again enjoy some actual travel.

During a three-week trip to Europe this summer, I climbed the bell tower of a Roman-arched church, stepping over several dead pigeons and one calcified rat. In sandals. I found a bird turd on my pillow. After I’d already slept on it. And I brought my Paw Patrol-aged kids to Michelin-starred restaurants. (Sorry, fellow patrons.)

Yet when I tell people about our travels, the experience that horrifies them more than any other is: I lost my phone on the flight to Munich, the very first leg of our trip. 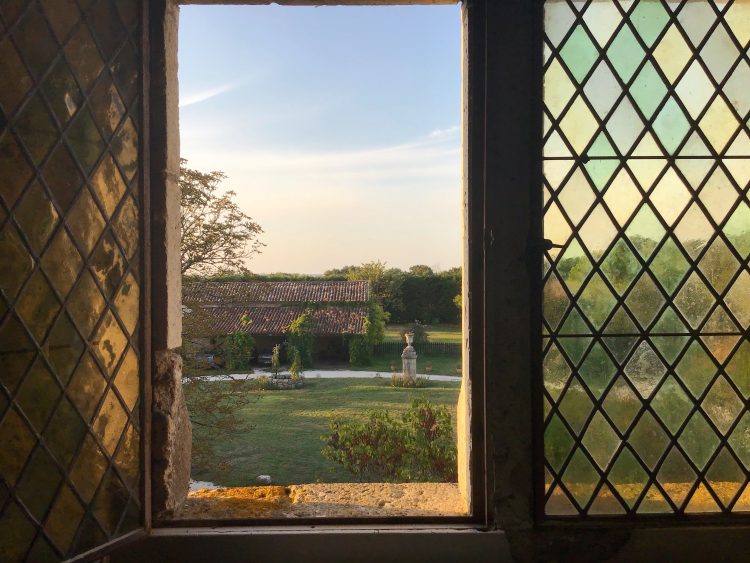 The pool house, as seen from our room at the Chateau Goudourville, a restored castle in Southwest France.

Yes, I spent three weeks with my family in some of the most photogenic locales on the planet – the French countryside! The beaches of San Sebastian! The McDonald’s PlayPlace! – sans iPhone.

And you know what? I highly recommend it.

The experience of phonelessness is a bit like time travel. Specifically to 2004, when I left my (flip?) phone at home to backpack my way from junior to senior year of college.

We used internet cafes back then. We scheduled calls with our families and then marched down the block to payphone cubicles to make them. Sorry: phone booths. It’s been so long since I used one I forgot what they’re called. We used real, printed maps, held aloft like, well…tourists. We referenced Lonely Planet guides and researched where we were going. In advance! 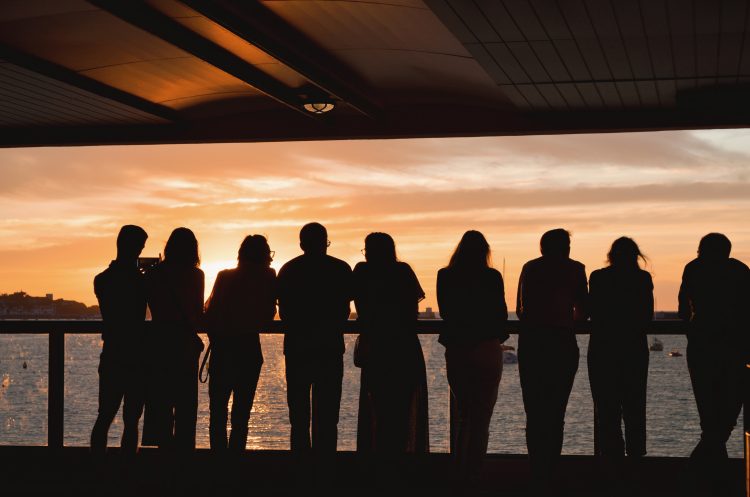 Super jealous of that guy photographing the sunset with his phone in Saint Jean de Luz, France.

It was entirely unlike the way we travel now, where we rely heavily on Google maps and user reviews of restaurants, eking out the day’s plans in real time.

Unless you ditch your phone, that is.

If you do – and hear me out, I think you should at least consider it – you’ll find a freedom you haven’t known in years.

Your out-of-office autoresponder will actually mean something. You’ll see the beach of St Jean de Luz as the expanse of pristine sand it is, not as potential content. You won’t have text messages pinging you while you sample local honey at an open-air market in Valence d’Agen. You’ll finally understand what Oprah means when she talks about being fully present.

Granted it’s not easy. In that open-air market you won’t be able to Google whether you should get the truffle-infused grape-seed or olive oil.

And you’ll want to consider how this will impact your friends and family because, believe me, the stress will wear on them. Your husband’s boss will offer to Fedex a phone to you across a continent and an ocean. Your soon-to-be brother-in-law will offer to procure a phone from his father, who is no less than the mayor of his town in Southwest France. Your friends back home with tell their friends back home nothing about your trip except your phone status. 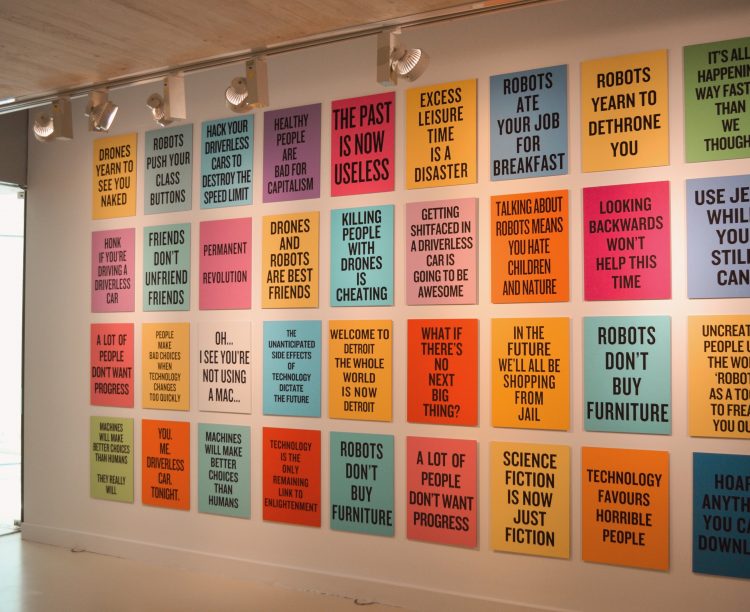 The first exhibit I saw at the San Telmo Museum in San Sebastian was by Douglas Coupland, who, like me, lives in Vancouver. But that’s beside the point.

When doing a Destination Digital Detox with others, logistics become paramount, especially while towing kids.

If your husband wants to take your little guppies to the San Sebastian Aquarium and you want to see the “Hello, Robot” exhibit at the San Telmo Museoa on the other side of the old town, you can’t rely on “where you at?” texts. Instead, you’ll have to pre-arrange a meeting point and – now this is where things get really quaint – a time to meet up. Pro tip: pack a watch.

When you want to read on the beach in Gros, the neighborhood where you’re staying in San Sebastian, you can’t just scroll to your Books app. You need to haul in your beach bag the 468-page Stephen King tome you found in the English-language section of the bookstore around the corner. 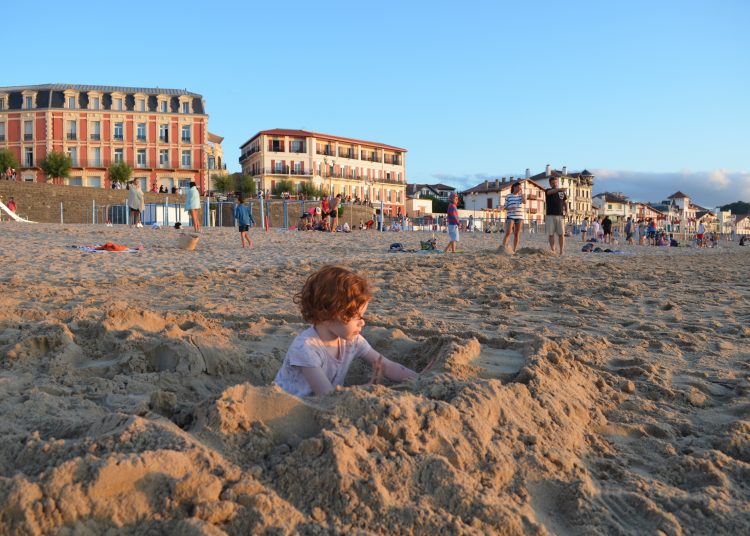 This photo probably wouldn’t have turned out as well on my iPhone anyway. It’s my kid on the beach in St. Jean de Luz, France.

When you want to take photos of the murals in the Toulouse Capitol, you’ll need to use the Nikon D5100 hanging around your neck, the same camera that will later inspire a saleswoman in a sunglasses shop to ask you questions in a French that far exceeds your 12th grade fluency. Can’t help you there.

When you do a Destination Digital Detox, you’ll experience the lost art of being off the grid. In the middle of a city, no less. Nobody will know where you are. Heck, you might not even know where you are. Consider bringing a map with you, because you certainly won’t be able to Google where to buy one. 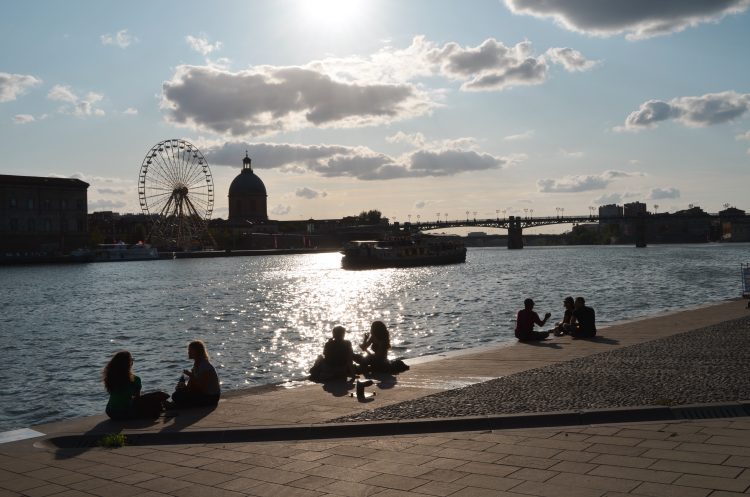 We were travelling with two young kids so we didn’t join these Toulousains for a drink on the riverbank.

Over the course of your lo-fi voyage, it’s possible you’ll have one friend email you — you’ll check it on your laptop back in your Airbnb in the evening because you’re not a complete luddite — asking you to post Insta stories from your trip. Here’s what you do: tell her you don’t have your phone with you and she will be so horrified at the prospect she’ll leave you alone.

Three weeks without a phone in a foreign land is a real trip. When you get home, you’ll reacclimatize to the pace of North American life with fresh eyes, now that you’ve experienced slow jet-setting. Your perspective will have shifted because you were forced to live very, very differently than you normally do.

You may find you don’t even install Instagram on your new phone until a month after you return.

And by that point you can finally answer the age-old question: if you go on vacation, but don’t post your vacation photos, did you really go on vacation?

[Photos by Kelsey Dundon, except for the first one, which my husband took.]

The AnthologyTravel
May 11, 2020 by Kelsey Dundon

Giveaway | $100 gift card for all those last-minute gifts!

Home | The Festive and The Furious