A guest post by the lovely La Couturier whose beautiful, stylish blog is always très amusant.

Sometimes I wonder why we get dressed in the morning.

Aside from decency’s sake, of course. Clothing is one of humankind’s basic needs – a bare necessity, so to speak – worn for modesty (at least for some of us), for warmth, and for self protection from the nakedness of vulnerability. Yet through the something thousand years of centuries past, clothing has become more than just a source of shelter for ourselves; instead, it has evolved into a distinctive reflection of ourselves, as individuals, and citizens of a community and its culture. Specific regions are now associated with a unique look, representing a nation, a city, a culture. 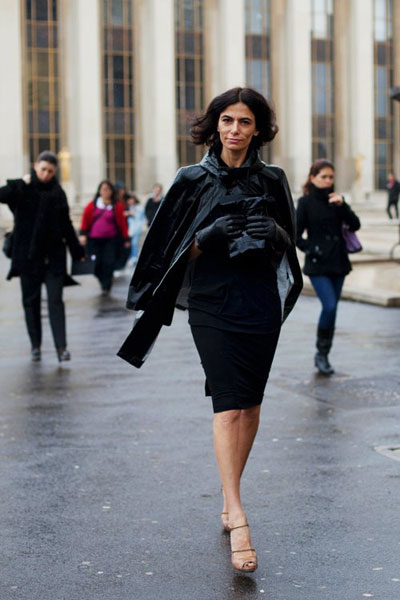 And among the list of the most prominent is the highly coveted, effortless, but inimitably coquettish look of the Parisian women. Surely we all fantasize dressing as such a woman, but the Parisian coquettes and likes of Clemence Poesy and Carine Roifeld can limit ourselves from the braver of fashions. Take New York, for example. The perfect juxtaposition of the punk-neon-bright and without inhibitions and subtle sophistication and sexiness of Paris. Of course this is all in my personal opinion; conclusions I’ve made based upon visits to both cities and endless (yes, endless) hours spent on streetstyle blogs. My disclaimer is but the usual: I am no expert of fashion, merely a seventeen year old girl who muses and mulls over fashion. And loves it. 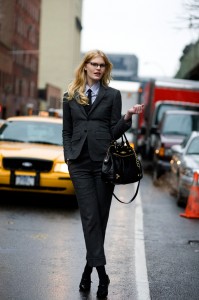 Excuse my digressive tendencies, and back onto the original topic of New York. The fashions in it exhibit a great mix of who women are; yes, there are excessive amounts of black-clad pedestrians (I myself, a non-New Yorker, am guilty as charged) rushing about the sidewalks. Yet another generalization I’ve made about city-wide dressing, but the dominance of black cannot be ignored. The color is iconic, symbolic of the seriousness of Wall Street, the practicality of the bustling commuters, of the timelessness of classicality in the city, and a hint of dark but demure sexiness. The excessive amounts of black also make it much easier to imitate; the basics include, but are not limited to: patent pumps, strappy heels, opaque tights, little black dresses, pencil skirts, blazers, double breasted wool coats… 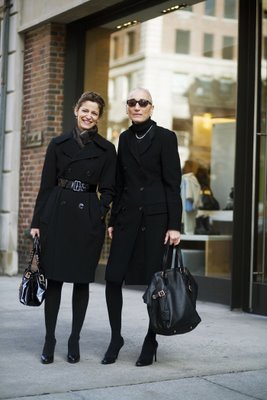 At the same time it seems as if New Yorkers are less inhibited, even if black seems to be omnipresent, and their clothing seems to mirror the corporate nature of Wall Street with the prevalence of menswear-inspired fashions. Embracing trends – the punk-rock inspired women who still look so sophisticated, the grunge-chic, the everything that has potential to look crazy but made chic. Women aren’t afraid to experiment, to stray from the “norm” of societal dressing: a bit more liner than usual, brighter lips, a vintage piece, etc. So long as a bit of that black is incorporated into the ensemble to tone down any of its crazier elements: a black coat, blazer, opaque tights, pumps, the likes.

And what makes these New Yorkers subtlety yet entirely different from the Parisians and Londoners and all other major cities is that those who are tourists of NYC say women are much more “put together”. For better or for worse, really. Parisian women embrace the au naturel face and slightly disheveled hair approach with beauty products. Londoners have no fear in trying the latest and wildest of fashions and beauty looks. But those of New York City always look perfectly done: flawlessly coiffed hair, blown out or curled without a frizz, French manicured nails, with an entire ritual of morning makeup.

One last touch of lipstick, gloss, and mascara. A loose tank tucked into skinny jeans, with a satin-trimmed blazer (black, of course) and black patent pumps. I grab the black Balenciaga motorcycle bag I’ve filched perpetually for myself from dearest mother and run out the door.

I get some looks, both in admiration (or so I hope) and quizzical glances. Do I dress to pretentious for my age and for New Jerseyans? Perhaps. Perhaps if I were to someday live in New York City I’d fit in without a second glance.

Thank you La Couturier for making me want to head straight to NYC.

All images by the incomparable Scott Schuman who started the Sartorialist as a tribute to stylish New Yorkers.