A-List | Fiction to curl up with

I’m such a big fan of your blog! You have amazing style and I look to you for a lot of my own outfit inspiration. I especially love reading about your travels, from your vineyard trips to outings with your adorable doggy. From a recent book post, I decided to take Glamorama and The Beautiful and Damned on my last trip. Thanks for the great suggestions!

Thanks, Amanda! Hope you’re going on another trip soon because Katie Burnett has compiled another reading list, perfect for fall… 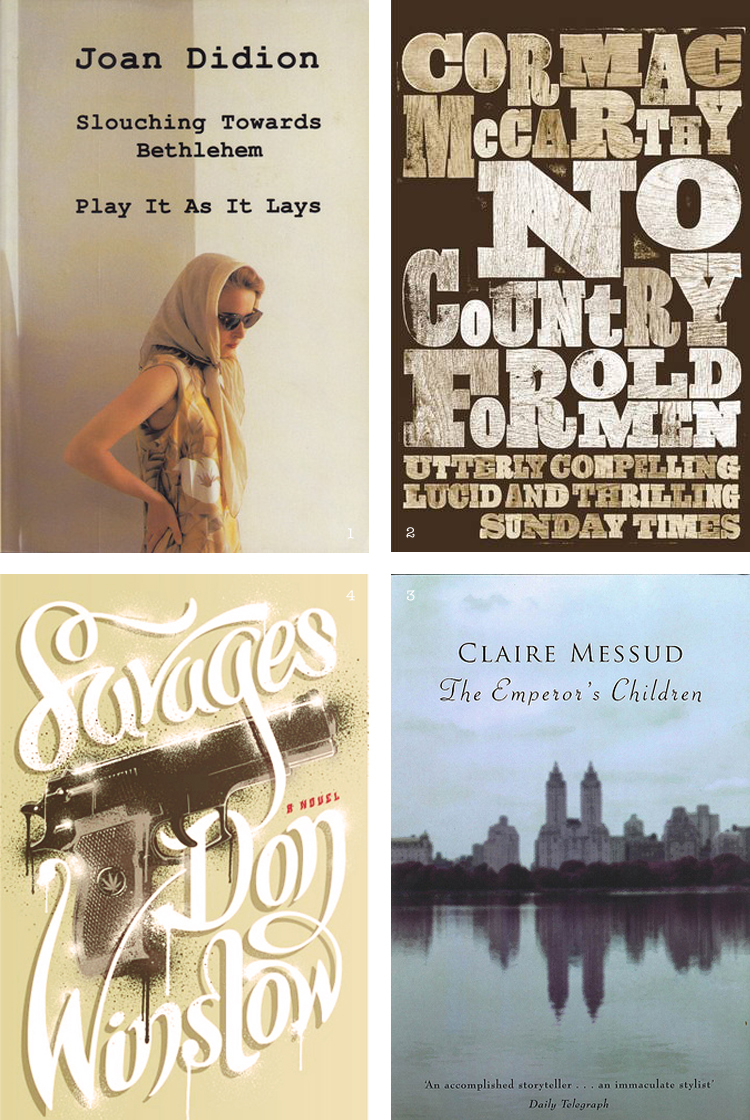 Fall is upon us, and that means it’s back to school and work, drudging through the books and other documents that are forced upon us. Since the weather is turning, and the movies won’t be interesting till Oscar season [except for Looper. It’s amazing! — Kelsey], relaxing with some fiction will be just what you need. Here are four great fiction novels to bury your head in.

1. Play it as it Lays by Joan Didion

Joan Didion is a famed essayist, novelist, playwright, screenwriter and altogether legend. Her books of essays never cease to dazzle and engage me, and her novel “Play It As It Lays” is a disturbingly good look at Hollywood in the 1970’s. A best-seller when it came out, it follows the troubled actress Mariah as she recovers from a breakdown. Slowly but surely we learn about her life in Beverly Hills with her husband, a director, and how a life of glamour and glitz isn’t always what it’s cracked up to be.

Further reading: Try Didion’s essays like the collection “The White Album” about life in California in the 1970’s, or what is perhaps her most famous work, “The Year of Magical Thinking”, a harrowing and eloquent book about loss.

2. No Country for Old Men by Cormac McCarthy

This is both a formidable film and novel, and I can assure you even if you’ve seen the film, it’s worth reading the book. From the first page it will possess you and I can assure you, you won’t want to put it down! Part of Cormac McCarthy’s “Border Trilogy” novels, this one takes place along the US-Mexico border and follows three very different men – a sociopathic killer, a sheriff, and a war vet – as their lives intersect after a drug deal has gone awry. It is an engrossing and brilliant novel that is so beautifully written, it’s no wonder the author has won a Pulitzer Prize!

Javier Bardem is still hot as a psycho in a funny wig: Even if you’ve seen the film before, it’s worth a watch after reading the novel – the Cohen brothers, in top form as always, did a phenomenal job of capturing the mood and brilliance of the novel.

3. The Emperor’s Children by Claire Messud

Set in New York City, “The Emperor’s Children” is a dazzling novel and social satire focused around a group of friends who haven’t quite achieved all they’ve wanted to by 30, and a troubled college dropout who goes to stay with his uncle in the Big Apple. Naturally, trouble ensues as everyone’s lives intersect, and it’s an incredibly multilayered story that is as captivating as it is troubling.

Fun to note: Noah Baumbach has long been attached to direct a film version of the book!

You may have seen the Oliver Stone-directed film “Savages” this summer, based on Don Winslow’s book, which had its moments, but the book is phenomenal. Completely engaging, the story follows two best friends in California who grow and sell weed, while also sharing a girlfriend. When the Mexican cartels want a piece of them and they decline, their girlfriend is kidnapped, and they have to go rescue her. The book is written in a prose that is super unique and you won’t be able to put this down. In fact, I picked it up at a bookstore and was so into it, I had to sit and read it all in one go. It’s a fun, fast and entertaining read, and even if you’ve seen the film, I promise you’ll want to read the book for more details and twists, and a very different ending.

After you’re done: Don Winslow has recently released a prequel, “The Kings of Cool.”

P.S. Catch up on Katie Burnett’s earlier dispatches, like her recent recommended reads and add to your “When I’m in London” list: Sundays on Brick Lane, Saturdays in Camden Town, Friday nights at the theatre, and East Coast nostalgia.