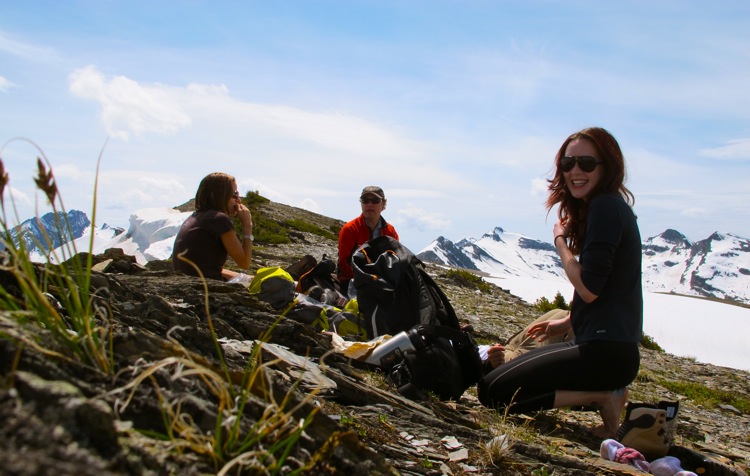 This summer, I went heli-hiking with the pioneers of the heli-adventure: Canadian Mountain Holidays (CMH). I loved every single minute of it. Although some of those minutes, like the ones recounted below, were flat-out terrifying. 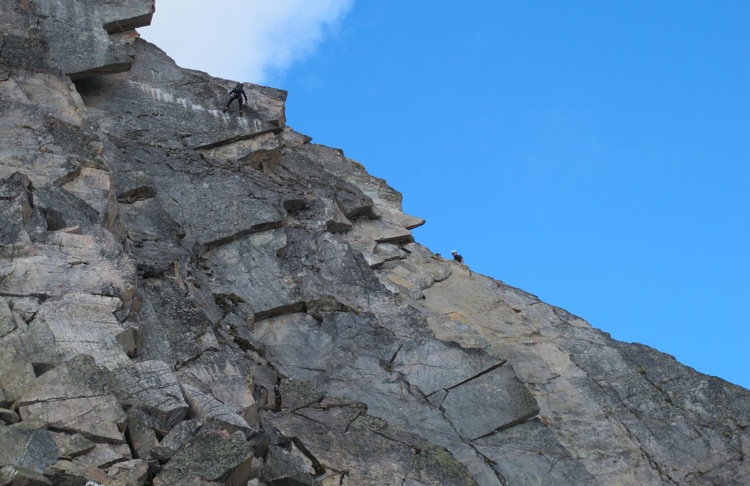 I feel like I’m going to be sick. I sit down to try to stop my legs from shaking. Below me is mountainside and below that is a tree-covered valley and below that is more mountain and more valley and I can’t see any level ground other than this coffee table-sized helipad I’ve just been dropped off on.

I’m about to climb a Via Feratta. Latin for ‘iron way’, a Via Feratta is a series of metal rungs and cables fastened to the rock face so even those who have never been rock-climbing can scale a cliff like this one, which stretches 1,200 feet above me. Invented during the First World War to move troops over the Alps, people now choose to climb these things for fun and the practice has become so popular in Europe, CMH has built two in BC. 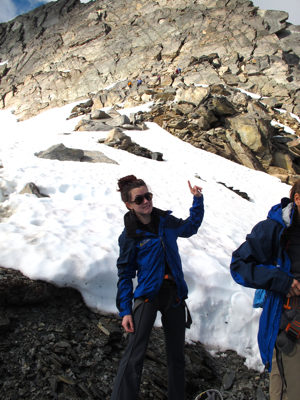 “Focus on the rock in front of you and don’t look down,” says my mountain guide Peter Macpherson as I’m cinching up my harness. “Remember to take small steps.”

So even the pros are telling me to take baby steps.

We begin by sludging our way up a snow-covered slope, kicking our toes into the mountainside to carve out our own steps. The snow is slush, the drop is long and I’m not locked in at this point. I don’t have any poles to brake a slide. I don’t have anything except gloves that are too big for me, a harness that’s too tight around my bladder and a pounding in my ears so loud I feel like I’m going to have that panic attack I’m so afraid of.

We get up to a bench, a ledge on the mountainside that can’t be more than 18 inches wide. But it’s flat so it feels so, so good. And there’s a rope so I can finally latch the two clips that run from my harness like an umbilical cord to the mountain. If I slip now, I’ll only fall a few feet before dangling off the side of the cliff. I find this comforting.

The woman right in front of me, Joanne from New York, assures me she’s as terrified as I am. And she even climbed a Via Feratta a couple days ago.

“If I had known what it was before I went, I would never have done it,” she says. Yet here she is.

I would never have done it either if it weren’t for 69-year-old Mike Brink from Massachusetts whose gentle encouragement (read: peer pressure) prompted me to face my biggest fear: heights.

At first there are proper nooks in the rocks for me to place my feet. It’s steep, but I’m framed by rugged boulders on both sides. This isn’t so bad, I think. And then I look up. Carved into the very, very vertical face of the cliff are iron rungs that look like giant staples. Even though this particular route is called the Sky Ladder these rungs aren’t evenly spaced or lined up one above the next. They’re sporadic, so wide apart you have to straddle the mountain from one to the next and in between are footholds that don’t seem like they could support me or my clunky hiking boots – few are more than an inch deep. 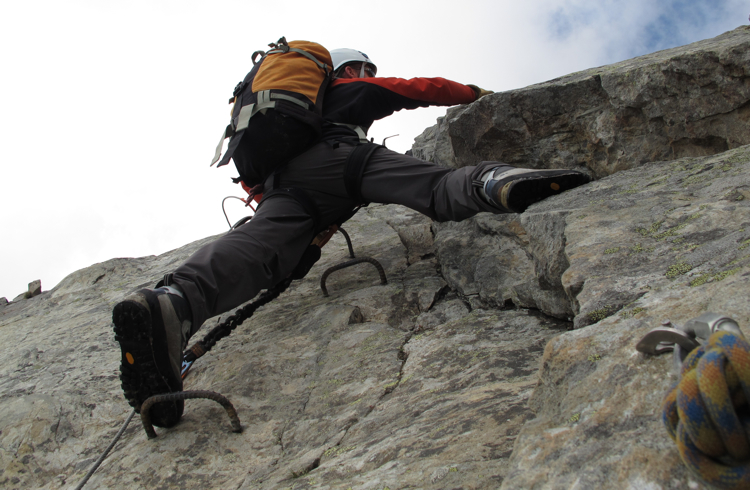 I feel the panic rising. It starts in my stomach and moves to my shoulders and I know I could let myself succumb to this. As I have neither vodka nor Ativan with me, I try calming my nerves the old-fashioned way: with a good, stern talking to. “I’m doing this,” I say to myself. Which is to say both “I’m already doing this” and “I’m going to keep doing this.”

My harness clips are attached to the rope that’s running vertically beside me. But they don’t stay there. Each length of rope is about eight feet or so, which means when I get to an end that’s bolted into the rock, I’ve got to unclip – one at a time – and move them up to the next portion.

Because only one hiker (climber?) can be on a length of cable at any given time, it can be slow going, which is fine when I’m resting on a flat bench – and there are a few on this route – but when I’m clinging to the rock like a starfish in the sky my mind starts wandering. And I start noticing how vertical this cliff is and I start thinking about how everyone tells me not to look down. But that just makes my imagination run wilder so I face the monster under the bed and I look straight below me. What do I see? My big hiking boots on a small iron rung, the cliff, the snow, the postage stamp-sized helipad way in the distance. 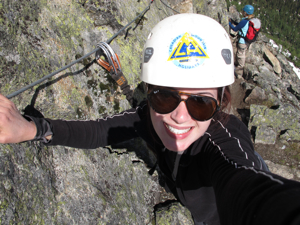 The next phase of the route has me shimmying horizontally on a narrow little ledge, which I don’t mind. But then the ledge ends and I have to wrap my body around a 90-degree bend. The world falls out below me and yet for some reason there are no rungs here, just the natural, narrow footholds in the rock. Somehow my clunky boots and now-bare hands (cold cable and muddy rock felt better than letting my fingers swim in oversized gloves) find their way.

I look up and the mountain is folding back towards me. If it’s my vertigo or the vertical, I can’t tell, but my knees are shaking again and I’m starting to feel woozy.

The rock gets steeper and the angles get more angry-looking but thankfully there are more iron rungs. I leap across a divide and land on one, shimmy across and peer up over the jutting crag that I’m supposed to mount. Here, just below this ledge in the sky, I am supposed to unclip and reattach my clips to the cable. So I do.

As I ascend I keep banging my knees. Peter tells me to keep my body away from the rock but my instincts tell me to cling to that which supports me. I can feel my knees throbbing, I can see the bright red scrapes on my knuckles, but I’m doing this.

I’ve been doing this for nearly two hours. 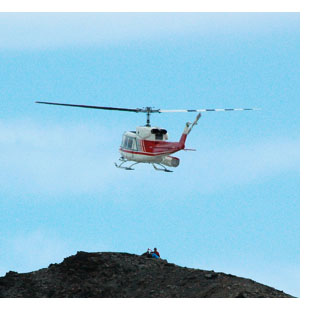 I swing my body up and see Peter taking a photo of the two New Yorkers ahead of me. I would love nothing more than to have him capture this moment with my camera too. I climb a few rungs and try to turn my body so he can grab my Canon from my backpack. Then the wind starts rushing over the ridge and I change my mind – even after coming this far and knowing the summit is so close I can feel the panic rising inside.

I must keep climbing.

All of a sudden the ground starts to level off. My legs are still shaking but I move more quickly and unclip and reattach my harness more easily. Then I climb the final boulder and reach the summit where I’m struck by the picture-perfect mountain ranges stretching out in every direction.

I sit. On somewhat level ground, no less. I feel the sun on my face and I feel the adrenaline slowly drain. As I’m sitting there on top of the world I feel a sense of accomplishment like never before. 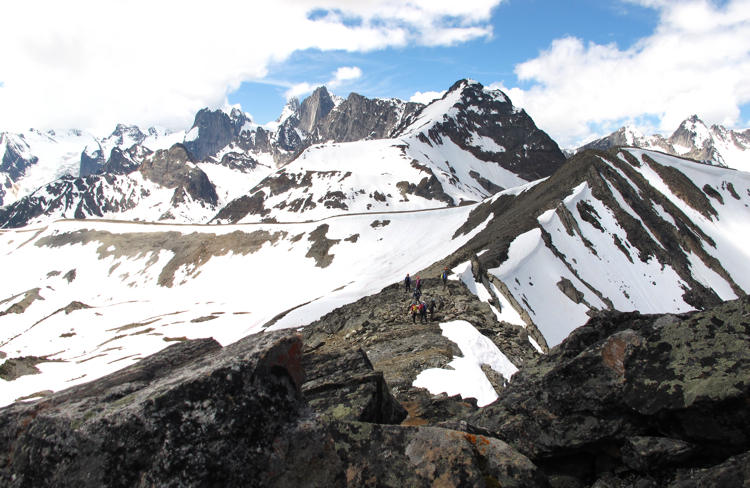 Thank you, Canadian Mountain Holidays, for such an amazing adventure!

Number 5 | The Anthology’s Most Ridiculous Moments of 2011